At the beginning of the 1970s, thanks to the foresight of some entrepreneurs, the world's largest skiing area, Dolomiti Superski, was brought into being. This ski carousel connects almost 450 ski lifts with just one ski pass, in about 40 villages in three provinces with a total ski slope length of over 1200 kilometres.
The "Sellaronda" is the jewel in the crown of the Dolomiti Superski area, a trip of about 300 kilometres around the Sella Group. The "Sellaronda" is unique and connects the Ladin valleys through a network of ski lifts and ski slopes 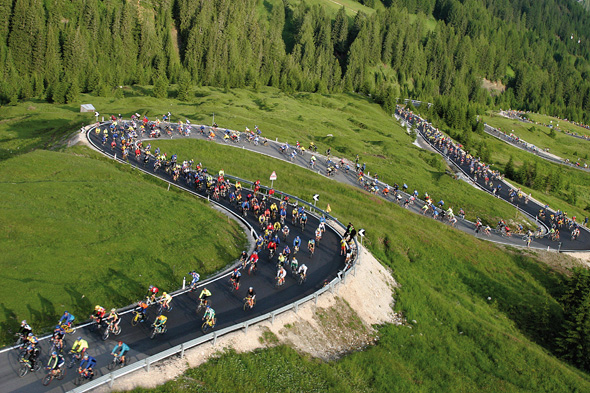 Sport is a motor for the tourist industry. In the beginning, the Dolomites were exclusively for climbing and hiking. Today they offer excellent facilities for bicycle tours, hanggliding and paragliding.
The alpine passes are a holiday destination for innumerable cycling fans. In summer international cycling events are organised. The "Maratona dles Dolomites", "Giro d'Italia" and "Transalp" all wind their way through the passes of the Alps and Dolomites. The enthusiasm of some cyclists from Val Badia led to the first "Maratona dles Dolomites" in 1987. Today the event attracts thousands of participants from all over the world and is of international importance.