From the 18th century farmers increasingly looked for possibilities to improve their standard of living especially during the winter months. Their innovation opened up several new opportunities. In Fascia the craft of "pitores" came into being: a decoration painter who embellished furniture and panelled rooms.
The Fascian "pitores" travelled to neighbouring valleys and even to other countries to offer their services. In Cortina d'Ampezzo the craft of the silversmith was widespread and in Fodom the art of the blacksmith due to the proximity of the mines of Fursil. In Val Badia chests were made and alongside that artistic weaving blossomed. In Gherdëina religious figures and "chiena" (wooden toys), were carved. Families produced these wooden toys in series: dolls, rocking horses, animals, soldiers. The origins of this craft go back to the 16th century.

Economic and social conditions forced many men, the fathers of families, to look for work away from home during the winter months. Therefore, women and children had to do the everyday chores and take care of the livestock. Wood carvers from Gherdëina travelled throughout Europe to sell their wares. In the mid 19th century there were almost 300 branches of Gherdëina firms which sold sculptures and wooden toys. At that time it was usual for a family to provide a craftsman with board and lodgings for a few days. This custom of travelling from house to house looking for work is called "jì sun la stieres" (working on the spot).

Even today craftsmanship is a fundamental part of Ladin economics. Some professions have disappeared while others have developed in accordance with the increase in tourism.
Mutual cooperation between craftsmanship and tourism can be seen in the hotel sector. Here carpenters, decorators, weavers, painters, and carvers have been able to adapt to a new working environment. 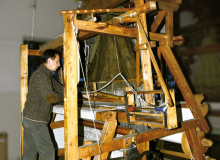 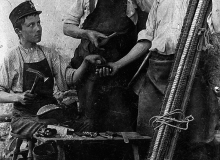 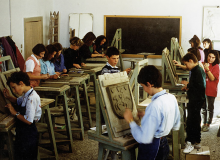