Between 1923 and 1927 the Ladin valleys were partitioned in accordance with the principal "divide et impera" (divide and rule): Cortina and Fodom became part of the Province of Belluno, Val Badia and Gherdëina part of the Province of Bolzano and Fascia part of the Province of Trento. Local inhabitants were excluded from public life.
Fascism meant the elimination of the South Tyrolean identity and Ladin was considered to be an Italian dialect. During this period the Italian government set out to change German and Ladin family names according to an index created by Ettore Tolomei. 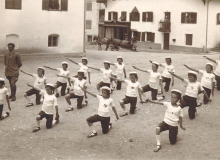 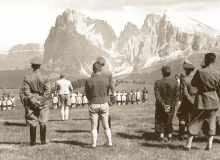 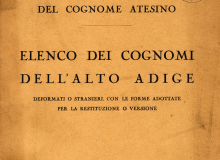 Either or: The Option

After the annexation of Austria to the German Reich (1938) Hitler and Mussolini confirmed Brenner as the official political border. Negotiation concerning the relocation of the German speaking population lasted over a year until the two dictators came together in Berlin in June 1939. The South Tyroleans were called to "Option", in other words to choose German or Italian nationality:
... they have to decide, clearly, irrevocably and with a clear conscience, whether they want to remain Italian citizens (...) or, in accordance with their personal feelings, become German citizens and consequently emigrate to Germany, where they all united, will get complete moral recognition and will receive financial support in a dignified and advantageous manner.
In contrast to Ettore Tolomei's theories, whereby Ladin considered to be an Italian dialect, the Ladins, with the exception of Fascia, were also included in the agreement. Nevertheless, about 300 Fascians registered their option for Germany. Through the outbreak of the Second World War and the collapse of the two dictatorships the exodus came to a standstill. 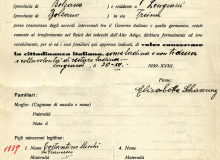 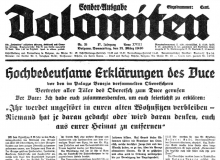 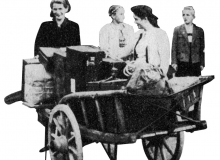 When the Nazis occupied South Tyrol Europe had been at war for 4 years. After the cease fire between Italy and the Allies on the 8th September 1943 The Germans occupied the Provinces of Bolzano, Trento and Belluno. Hitler stopped the relocation of the South Tyroleans and renamed the area between Kufstein and Ala "Operationszone Alpenvorland" (Operation zone Alpine Foreground). During the Nazi occupation (September 1943 – May 1945) only "Reichs-Optanten" (people who had chosen German citizenship) were employed in the civil and military administration of the Ladin valleys. This made the rift between Optanten and those people who had chosen Italian citizenship, "Dableiber", even greater. The "Italianisation" of the Ladin valleys became the "Germanisation" of the Ladin valleys. 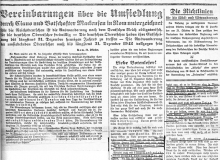 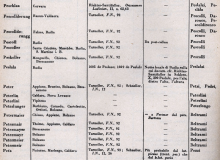