There was probably a homogeneous area sharing mutual language colorations.
This area was bordered by the Danube in the north, by Lake Garda in the south, by the St. Gottard Pass in the west and in the east by the towns of Trieste and Muggia.
After the fall of the Roman Empire (476 A.D.) other linguistic influences were effective in the Latinate alpine region:

Since then Ladin has been on the retreat.
The current language area is an archipelago of linguistic islands where idioms with phonetic, morphologic, syntactic and lexicographic similarities are spoken. The situation is shown in detail "ALD" (The Linguistic Atlas of the Dolomite Ladins).
The ladin language is also called Rhaeto-Romanic. The term was re-used by the scholar Theodor Gartner (1843-1925) to indicate the language and territory of the Grisons in Switzerland. Later the expression was extended also to the ladin languages of the dolomits and of the Friuli. Still, this term has erroneously induced to confuse it with the people of Rhaetians. In fact, some territories in which ladin is spoken were not englobed in the ancient province of the Rezia.
The linguist Graziado Isia Ascoli (1829 – 1907) from Goriz wrote, "Under the general term Ladin language and/or Ladin dialect I refer to all romantic idioms which – due to their mutual characteristics - are found from the source of the Upper Rhein to the shores of the Adriatic". 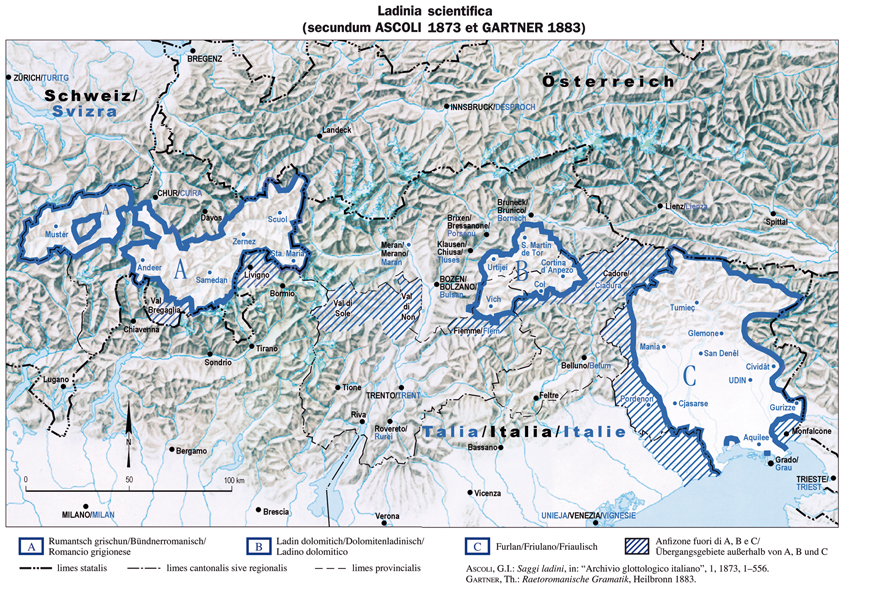