Throughout the Ladin speaking area there are pre-Latin (reto) place names as well as isolated words which originate from the pre-Roman period. 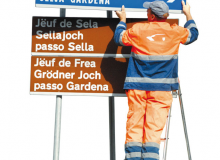